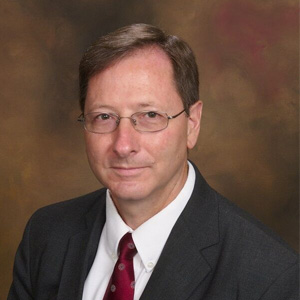 One of the challenges and opportunities in working in the radio business is how to continue advancing a medium that has held a ubiquitous presence in our culture for generations. New technologies allow audiences many more choices in how they consume content, whether analog or digital broadcast, satellite, or Internet. To stay vital, radio should strive to maintain a strong presence by producing compelling content, and a consistently dynamic look and feel across these platforms for a listening audience that has many new choices.

One interesting development has been the rise of hybrid radio, which supplements standard broadcast radio with data-transmission capabilities. Broadcast radio is perfectly suitable for reaching people almost anywhere in the country. It is not expensive to acquire a radio, and access to broadcasts is as straightforward as turning it on and tuning in. Traditionally, however, it has been a one-way exchange from station to listener and, for the most part, limited to audio only.

What makes hybrid radio particularly interesting is that it leverages traditional and HD radio with the internet to provide data, which can take the form of text, images, and interactivity. Combining all three is one way for radio to attract listeners to a station and keep them engaged for a longer duration.

Some of us in public radio are taking a closer look at hybrid radio and how we can use it to improve our product. The ability to supplement our audio broadcasts with metadata has been primarily limited to providing a song title and artist for music formats. The new approach by public radio allows for story-level data in news and talk formats.

The potential of incorporating metadata into public broadcasting grows because we are both a national network and a group of independent local news and music stations. Most delivery platforms for public radio currently do not provide metadata beyond station name and logo, and perhaps the name of the program on-air. At NPR Distribution, we are working to provide a framework for the next generation of metadata: fine-grained per-story and per-piece metadata that integrates local station information and distributes it to metadata-enabled devices.

Our motivation for this is simple: descriptive metadata attracts and retains listeners. When information about programs is made available, audiences tune in more often and remain engaged with the content for a longer amount of time. NextRadio, which combines broadcast radio with the internet for use on smartphones, looked at user engagement patterns, analyzing eight million listening hours to measure frequency of unique visitors and minutes-per-listener. As noted, stations attaching metadata to their broadcasts saw substantial increases in number of listeners and duration of listening time. 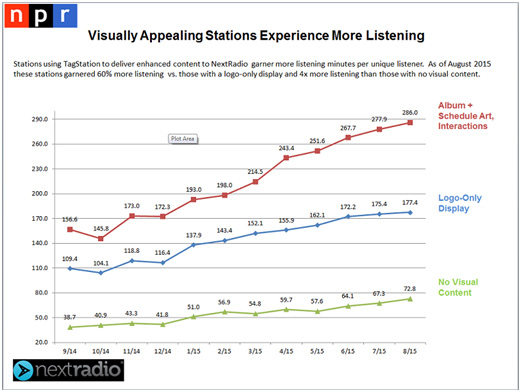 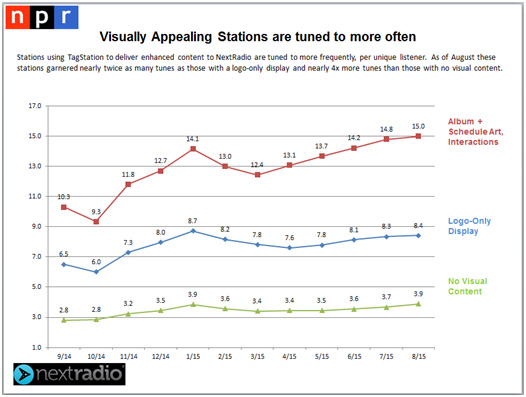 For sure, challenges exist in bringing metadata technology to public broadcasting. Among them, public radio is a community of independent content producers and stations of varying size rather than a single entity. News programming metadata is also less predictable than music programming metadata, because news programming is often “last minute” in contrast to song lists constructed in advance. Finally, public radio is evolving the same as all broadcasting, with new styles of listening and distribution arising with each new technology breakthrough.

Toward this end, NPR Distribution created for the Public Radio Satellite System (PRSS) a service called MetaPub, a new API that enhances national and local public radio broadcasts with a real-time flow of metadata from content producers. MetaPub is a federated metadata warehouse with a back end responsible for collecting, normalizing, and organizing data from various producers and a front end for exposing the data to stations via a hypermedia API. In the case of talk formats, MetaPub can provide unique metadata for each story in a program. 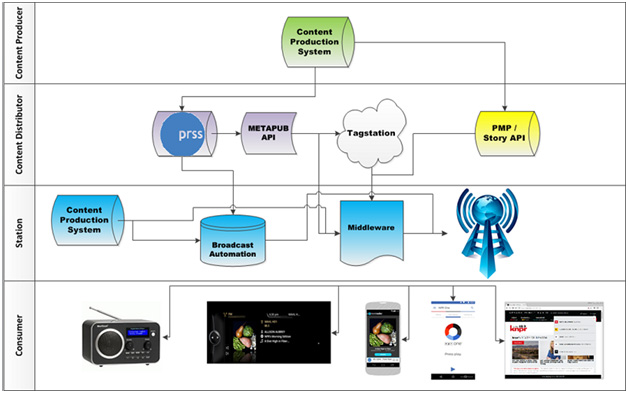 The first thing stations need to begin complimenting their broadcasts with dynamic images, text and links is to install the appropriate middleware:  third party software that is designed to integrate broadcast playout automation systems with sources of metadata, such as content databases, scheduling systems, and traffic reporting systems.

MetaPub was created with the above metadata challenges firmly in mind. It provides a single, common API to access data from multiple pubradio producers. This federated API uses producer-specific modules to normalize disparate data into a single metadata model. It is designed to be simple for station integration, and it provides a consistent framework that can be used with current audio delivery systems and those on the horizon.

The benefits of metadata are not limited to providing information about what is going out on-air. On October 20, 2016, six California public radio stations participated in the Great California Shakeout—an annual one-day disaster-response drill that simulates a devastating earthquake. Each of the six stations was equipped with the appropriate middleware and, on the day of the ShakeOut, pushed out metadata images that reached their listeners on cell phones, HD radios, in-car dashboard screens, and web streaming services.

The unique benefits of radio metadata are particularly suited for times of crisis, since electric and cellular networks are vulnerable during emergencies, and radio is often the best, or only, option for communicating information such as updates on shelters, aid or safety routes. Metadata can also provide emergency information for the hearing impaired who are unable to listen to a radio broadcast.

Going forward, metadata will involve a bi-directional data-enabled infrastructure that will allow listeners to “talk back” via IP platforms that can provide valuable data on audience engagement. This will allow the public radio community to enhance its programming based on user trends and activity and may also open up new revenue streams. Allowing listeners a simple and clear avenue to a station’s website through an on-screen link, specifically its donor solicitation page, has the potential to significantly bolster a station’s pledge activities. Linking listeners to underwriter web pages could also strengthen the relationships among stations, listeners, and sponsors.

The potential of hybrid radio, of metadata, and of MetaPub, is an interactive, data-enabled public radio system that engages its listeners more deeply and provides new methods of interaction between content producers, distributors, broadcasters, and listeners.

The Journey to Swift Digital Transformation

Virtual Immersive Learning: The Next Frontier in Higher Education

Making the Case For Moving from Health IT to Health Analytics

Data as a Business

Ricardo Leite Raposo, Director of Data & Analytics at B3